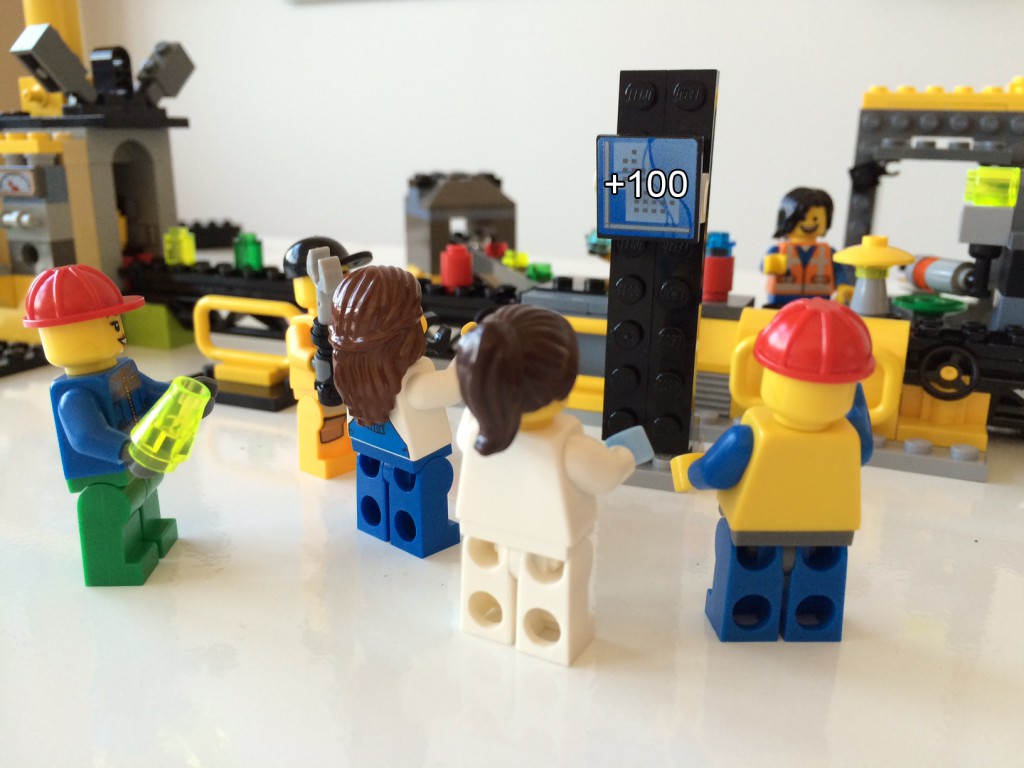 On first sight, assembly line production seems like the prototype of love’s labour’s lost for gamification: highly repetitive labour with no variation, constant productivity pressure with tight managerial control and serious consequences if anything goes awry. Employees work in strict shifts where every minute on and off work is monitored. How could one possibly afford a sense of agency, progress, autonomy, or any other engaging quality characteristic to gameplay in such a context? That at least was my initial reaction when, in 2013, a client* asked us to “gamify” operator stations at a lamp production facility.

Our company, a user experience service provider, was asked to design a new user interface for different operator stations of a brand-new production facility for customisable table lamps and similar products. The explicit goal was to create an interface that not only allowed operators to work efficiently and effectively, but also delivered a great user experience fitting the specific requirements of each operator station.

For those not familiar with industrial assembly: everything in assembly line production is geared towards and organised around the way the machines operate, aiming for maximum throughput and quality, and minimal machine downtime. Operator stations are lined up in a row with the production machines with very small degrees of freedom in the process flow.

After discussing potential motivational and playful elements in this context, we initially came to the conclusion that this must be one the worst environments to gamify, given the low degrees of agency. Luckily, we did not stop here. Instead, we started looking for games that share some qualities with our context for inspiration: Simple and very repetitive interaction in FarmVille; physical interaction with little degree of freedom in Dance Dance Revolution; simple touch gestures with maximal impact in Infinity Blade. With these examples, we came up with several motivational and playful elements – always making sure to maximise the autonomy and agency of the employee, and avoid potential harmful effects of direct competition and control.

From observational studies and interviews we learned that the team members of a shift have strong social bonds and are willing to help each other. So when we considered whether and how we might implement a point system, we articulated as a design goal to strengthen and use rather than harm these bonds.

The team score we created is fairly simple: Each action by each operator – from outboxing a lamp part to doing a quality check – generates points. Points add up to a team score, with no individual score shown anywhere.

The team score not only measures and encourages efficiency, but also supporting other team members. For instance, entering suggestions for optimising the workflow also pay into the team score. Every time a team member logs out of her or his shift, s/he is asked e.g. to choose the most valuable colleague (‘Most Valuable Mate’) of the shift, or provide information which station is the most difficult one to handle. Team points can be collected for answering these voluntary questions.

Rather than comparing teams with other teams, putting them into a competition with each other, each team can see its current day score compared with those of previous days and an all-time high score. This generated the positive effect of operators discussing why today’s score was lower than the day before or how they could improve the overall process to score higher. Once or twice a year, seasonal events put shift teams from other locations (several identical plants exist in different countries) against each other in a one-week playful competition. This includes daily video conferences between locations to get to know other operators from around the world and encourage knowledge exchange. Thus, again, there is no competition within a given location, and the competition is framed (and used) as much as a means to socialise as to spur efficiency.

Another area where we implemented a gameful element is the management of work breaks. In the lamp production plants, with ten to twelve operators working in parallel, throughput might be significantly lowered if four or more operators take a break at the same time.

In response, our system suggests optimal idle times on request of an operator: An operator can always take an immediate break. But in addition, the system also calculates and offers an optimal beginning time for the break that minimises impact on the throughput of the given assembly line, which the operator can voluntarily choose to accept instead. The suggested break time comes with a time bonus of three to 15 minutes. If the operator chooses to postpone her or his break to the suggested optimal time frame, this bonus is directly added to the operator’s total idle time allowance. The bonus is based on an algorithm that calculates the potential loss in production throughput and time if the operator takes an immediate instead of optimised break. The higher the potential loss, the higher the offered bonus time.

Some steps in the assembly process require two or more operators to collaborate directly. During observation, we encountered a major problem in one case: Two operators work hand in hand to assemble three lamp parts. For this, the second operator in line has to adjust to his or her colleague’s working rhythm. However, at one step, the second operator has to turn 90 degrees in order to check the quality of a lampshade before assembly. In this moment, he or she cannot see his/her first in line colleague – and thus, loses awareness of the progress the colleague is making (see picture below). Thus, the second-in-line operator doesn’t synchronise his or her speed with the first – which frequently generates inefficient idle times where the first operator waits for the second.

We experimented with a lot of different types of visual and acoustic feedback to provide the second worker with an immediate feedback on the first-in-line’s production progress. The solution we ended up on is an LED-powered progress bar that shows the assembly progress of the colleague in three steps: start, in assembly, nearly ready for take-over. This display is based on optical sensors that recognise specific hand movements of the first operator in line.

This progress feedback minimised waiting times. Another positive side effect we found was that there are colleagues who share a similar rhythm or act better in the roles of first or second operator at this specific station. Based on this information, the team lead can better decide who to place in which role, making the process not only more efficient but also placing people in the role they prefer or they want to train.

As noted, we were initially skeptical whether we could find any fitting playful elements for this specific work environment. Specifically, we were very skeptical about introducing a point system, given the legitimate concerns regarding potential undermining effects of points, badges and high score lists. Yet in our role as user experience designers, we had the chance to run a lot of initial interviews and follow-up tests and interviews, learning more and more about context and the impact of different versions of different game mechanics on the overall process, and even more importantly, how these were received by the operators. This data gave us reason to carry on. Until now, we just ran smaller tests and a few interviews to make sure we are on the right track. Starting next year, we will kick-off a larger, long-time oriented study and are curious to find out, if and how the reception of all mechanics will change over time. Once this study comes to an end, I hope I can share some further insights.

And one last thing: To ensure maximum autonomy and agency, every gamification element we implemented can be turned off individually by each operator – with one exception: While an operator can deactivate the interface element that shows how much s/he is contributing to his or her team’s score, the contribution itself is still tracked and added.

PS. There is a gamification TV documentary by German broadcaster 3sat in which the LEGO models appear; even without understanding every word it might provide additional insight (our part starts around 24:50).

* Disclaimer: Due to strict NDAs I cannot provide a company name nor can I share photos of the machines or interface screenshots of our implementation. All I can show you are pictures of a self-made LEGO model to feed your imagination.