Or at least, that’s what  our study at Aarhus University found. Something had been bothering me for a while about gamification – both as a game scientist and as a psychologist trained in evidence based practice. All this talk of gamification involves a lot of hype and claims about game elements like badges, levels and achievements, but pundits never bother to dissociate the effects of each such mechanic. Would it make a difference if we removed, say, the leaderboards? What if we took all the game rules out? What if visually and verbally presenting something as a game is just as important as the game mechanics?

The discourse around gamification also likes to cite Edward Deci and Richard Ryan’s intrinsic motivation as an outcome of gamification. Well, guess what? I’ve been teaching that theory for years. Psychologists can measure that! So we did an experiment, which is now published online in Games and Culture, demonstrating that presenting an activity as a game meant just as much as the game mechanics behind it. I’ll walk you through our thinking, the experiment, the results, and why I now advocate a more piecemeal and controlled experimental approach to gamification research: A methodological rigidity which the sparse research thus far could benefit much from.

All animals, humans included, seem to be fitted with a “play mode” from birth: A switch that can be flipped on and off, demarking that something we are doing is not serious – it’s for fun, or at least it involves playing around with the serious things. We find play behavior in all kinds of animals, and social species are very good at initiating play with each other, communicating “hey, I’m just messin with ya! come on! let’s play!” even if it can look like fighting, chasing, mating and other serious stuff.  This has important social and biological functions for young and adults alike, including learning, alleviating tensions in times of stress and cementing relationships with kin or new potential allies. In other words, play and fun is something that comes naturally to us, and is often triggered by factors outside of ourselves. This is where game elements become useful in non-gaming contexts such as exercise or workplace seminars.

Some game elements might just act as smoke and mirrors to flip the play mode switch, and thus garner some intrinsic motivation. We tested this hypothesis with a controlled experimental setup. 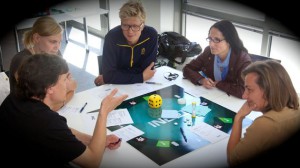 90 psychology undergrads from Aarhus University were randomly assigned to three experimental groups. All were then given versions of the same task – namely discussing student satisfaction issues. One student would read an issue aloud and facilitate a brief discussion around a table of 5-6 peers before passing the reader/facilitator role to the next person. After each discussion the group rated their argument and the importance of the issue.

We used Ryan and Deci’s intrinsic motivation inventory (IMI) and behavior setup to compare engagement in the three groups. (You can read the full study here.)

The game mechanic was fairly rudimentary, but survey measures demonstrated a significant (descending) difference in how gamelike the gaming-group, the framing-group and the controls found their respective activities. In terms of intrinsic motivation, however, there was no significant difference between the two groups who had been seated around game materials. Both found the activity more interesting and engaging than did the controls. There were no differences in other subscales from Deci and Ryan’s intrinsic motivation battery: The three groups viewed their activities as equally important, useful and socially meaningful. We also attempted to monitor behavior, to see if the self-reported motivation would rub off on productivity or desire to continue playing, but the data were a bit muddy.

What the results showed, then, is that people can be made more intrinsically motivated simply by presenting an activity as a game. Not points. Not badges. Not because of any measurable difference in social game leverage. The controlled setup allowed us to discover that presentation alone flipped the “play switch” on. 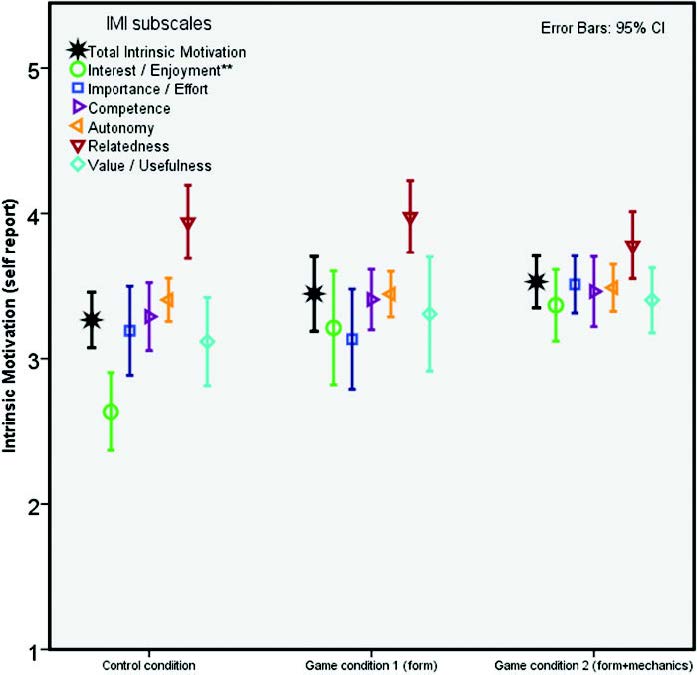 This is just one narrow(ly) (de)limited experiment. It doesn’t claim to explain everything worth knowing about game psychology or gamification. Indeed, reviewers and online commentators have had some interesting ideas and constructive things to say about the setup. What this study really demonstrates is that elements that visibly and explicitly present an activity as game-like, and scaffolding the subsequent behaviors with interactions known from the world of games, has a measurable impact on self-reported interest/enjoyment.

I suggested that this is a framing effect, but in a blog post Richard N. Landers rightly (among other sharp thoughts) points out that several informational devices acted as gamification elements at the same time, meaning that we don’t really know whether effects are due mainly to e.g. the game-phrasing in the instructions, the professionally layouted materials, or something else.  Our study would have benefitted from conversation analysis or other ethnographic approaches to map what went on between people in the different groups. It is also quite possible that the novelty would wear off in a study over time, and that good game mechanics would therefore be needed to keep users interested beyond the controlled confines of a research session. The experiment mirrored board games used by consultants and process facilitators in organizational psychology. That only allows us to draw conclusions about digital offerings by strained conjecture. Hence, the next natural step (for which we have just achieved seed-funding from the Interacting Minds Center – weee!) is to take new experiments online, and do away with the uncontrollable factors of herding 90 people into three separate rooms, and seating them in small conversation groups.

Studies of gamification are still few (see Hamari’s, Koivisto’s and Sarsa’s 2014 review), and they tend to lack in method.  The field is filled with hype. To make matters worse, it is extremely difficult to identify the contribution of individual game elements in case studies that mix them together – from friendly graphics to badges, levels and story. Our experiment demonstrates how easy it is to get positive responses in gamification studies: Framing is just as important as mechanics. But it also illustrates that we can (and should) dissociate the effects of different elements and psychological mechanisms by using more rigorously controlled experimental setups.

The first step is breaking ideas circulating in the gamification community down into testable hypotheses. For instance, are the points, badges and leaderboards of “first generation” gamification equally important? For what or to whom? Smart experimental setups and statistics can help us sort such matters out in coming years. Like Ian Bogost, I’m pretty sure that gamification involves immense amounts of bullshit. But as a psychologist I’m much more interested in finding out what actually works (and how it does) than criticising those who walked before us.