The proceedings of the 2011 MindTrek conference are finally online in the ACM Digital Library, and with it, the paper I co-wrote with Rilla Khaled, Dan Dixon, and Lennart E. Nacke on “defining the damn thing” – that thing being “gamification,” of course. END_OF_DOCUMENT_TOKEN_TO_BE_REPLACED

Over at Gamification.co, Gabe Zichermann kindly responded to my review of his book Gamification by Design. At the risk of tiring even the most steadfast of readers, I would like to respond to the points he made there.
END_OF_DOCUMENT_TOKEN_TO_BE_REPLACED

In response to my review of Gabe Zichermann’s book Gamification by Design, Tim O’Reilly has posted a reaction on Google+. The upshot of his reaction is puzzlement at the amount of “scorn” and “vitriol” aimed at the book, given that “there is a there there” with gamification, and a kind, understanding attempt at explaining my strong reaction to himself: He wondered whether my review was driven by the same kind of disappointment he felt at the way the term “Web 2.0” was “hijacked by marketers to mean something far more shallow, far less interesting” (please read his response in full). END_OF_DOCUMENT_TOKEN_TO_BE_REPLACED 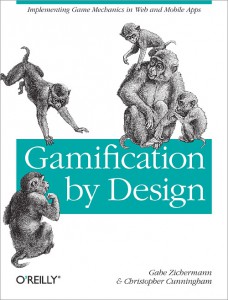 For one answer to this question, let’s have a look at the new book by Gabe Zichermann, Gamification by Design. Zichermann is one of the most public gamification proponents today, and chair of the Gamification Summit, now in its second iteration this September 15-16 in New York, where the book will be officially launched. END_OF_DOCUMENT_TOKEN_TO_BE_REPLACED

Sometimes, it seems that we live in parallel worlds. Like this one: END_OF_DOCUMENT_TOKEN_TO_BE_REPLACED